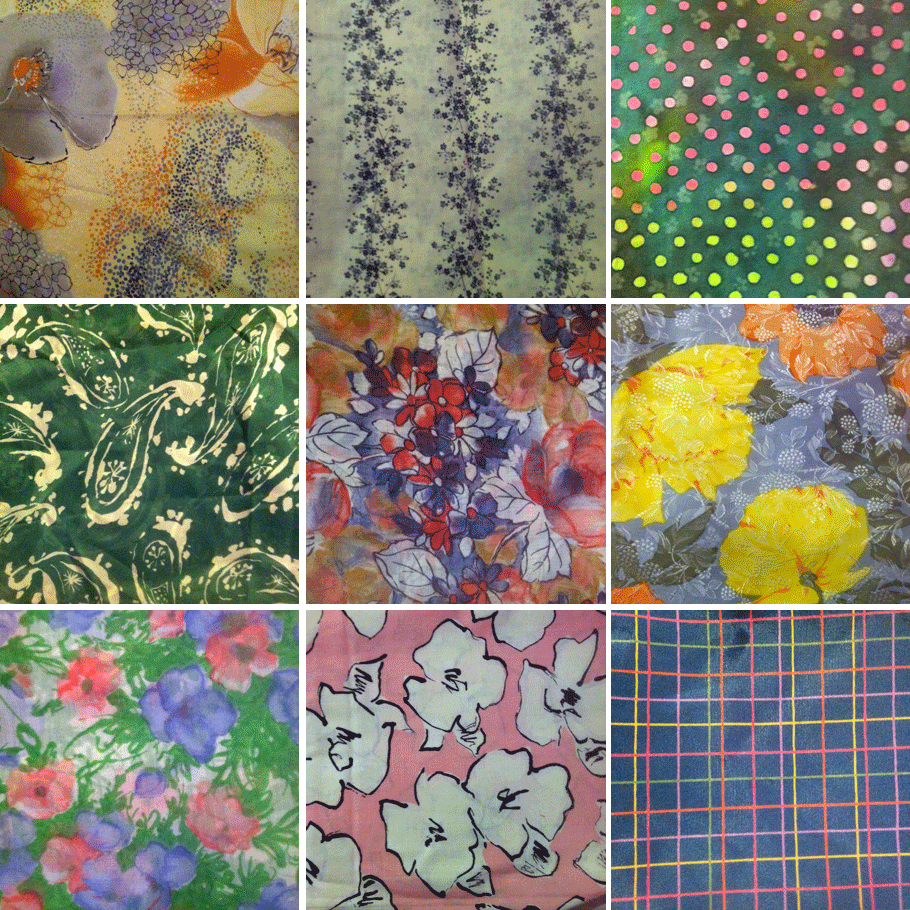 I spent the holidays visiting family in Portland and came back to a gnarly cold, so I’ve been offline mostly. I have bits and pieces of a half-dozen different projects brewing, but not much complete or bloggable due to frequent breaks for interacting with actual living people (you know how it goes). We had a house full of cats this year, including the two year’rounders (Purl and Felecia, aka Puddin’ and the Tiny Murderbeast) plus a visitor (Frederick Bear, who lost no time at all making himself at home.) So between Cat Politics, the photo-shy dog, and a full schedule of family and friends, it’s been a busy two weeks.

A visit to my parents’ basement is always both inspiring and sobering, crammed as it is with the creative paraphernalia of three generations. There are flat files full of art papers, bins of paints, bookbinding and framing supplies, beads and embroidery flosses, origami paper, bits of wire, chunks of wood, bins of yarn that we inherited from my mom’s mother, the legendary knitter, and of course boxes and boxes of fabric and patterns. 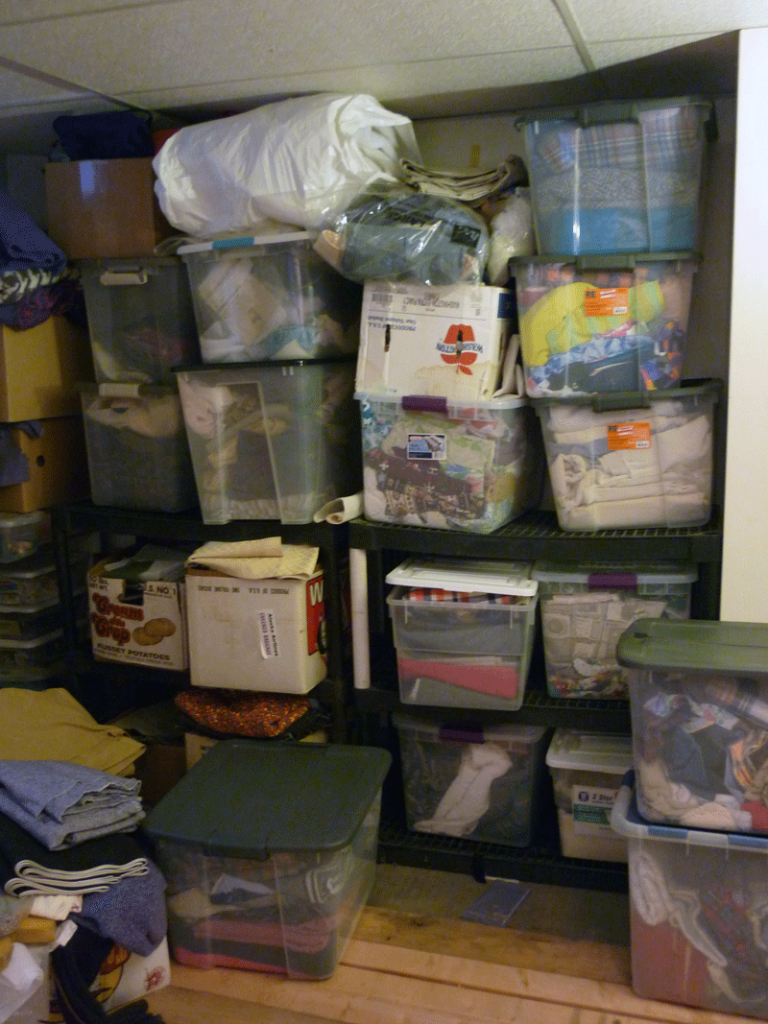 A few of the pieces here are my doing, though most of my stash is in NYC with me. Some of it came from my great grandmother, mostly corduroys and polyester prints. Most of it belonged to my dad’s mom, who contributed a good six or eight boxes—the big stapled-together kind with matching cardboard lids that they use to ship oranges (complete with assorted retro branding.)

Grandma had excellent taste, and apparently spent a few of her youthful years in New York being MEGA GLAM. So a few of those boxes contained very fine cottons, silks, and wools. She favored soft, watercolor-y florals, often in pastel colors, vivid batiks, and occasional polka dots, none of which are exactly my cup of tea, but the quality of the fabrics is apparent. There are several yards of pink and turquoise plaid mohair that she once remembered to me in particular, plus a treasured bit of burnout velvet that her mother bought in the ’30s (which I’m a little afraid to even touch.) She definitely frequented the remnant racks, and there are a lot of interesting small cuts of wool and wool blends, some of them with labels still attached. 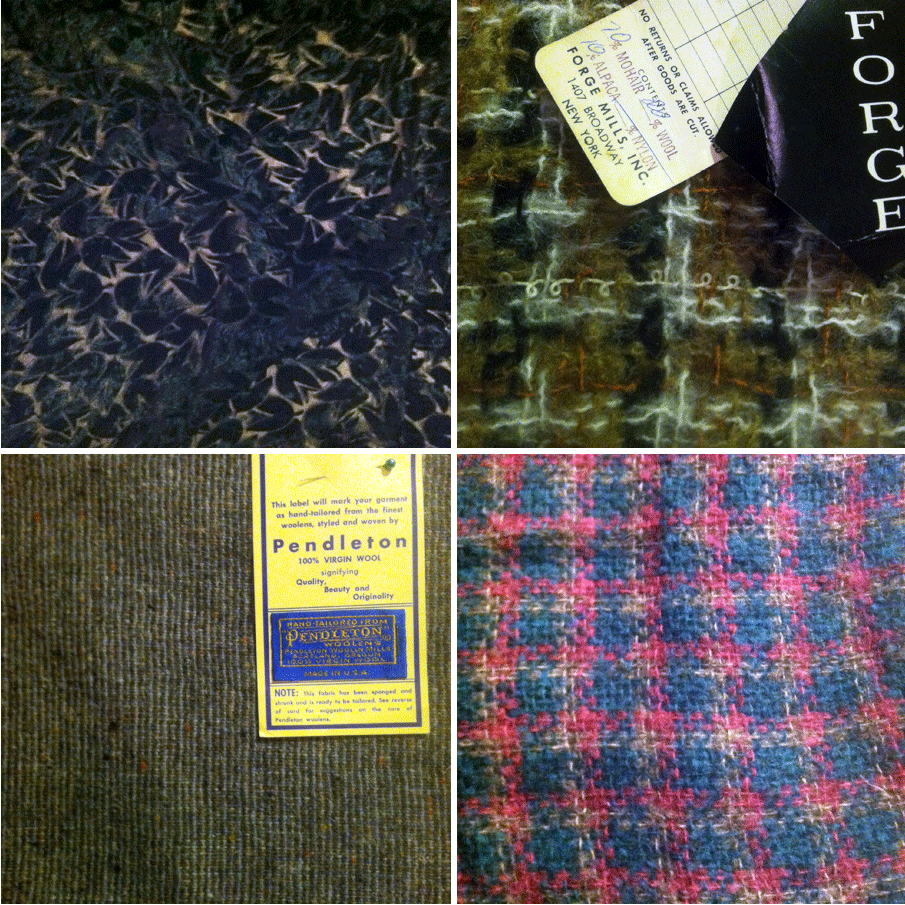 She also had an impressive collection of sixties and seventies prints, many of them LOUD LOUD LOUD. I can’t begin to imagine wearing some of these, but since I’ll be the first to admit that my own affinity for basic, wearable fabrics is boring as hell, I don’t think that’s a bad thing. Here’s a sampling of prints that made me smile, but there’s a lot more where that came from: 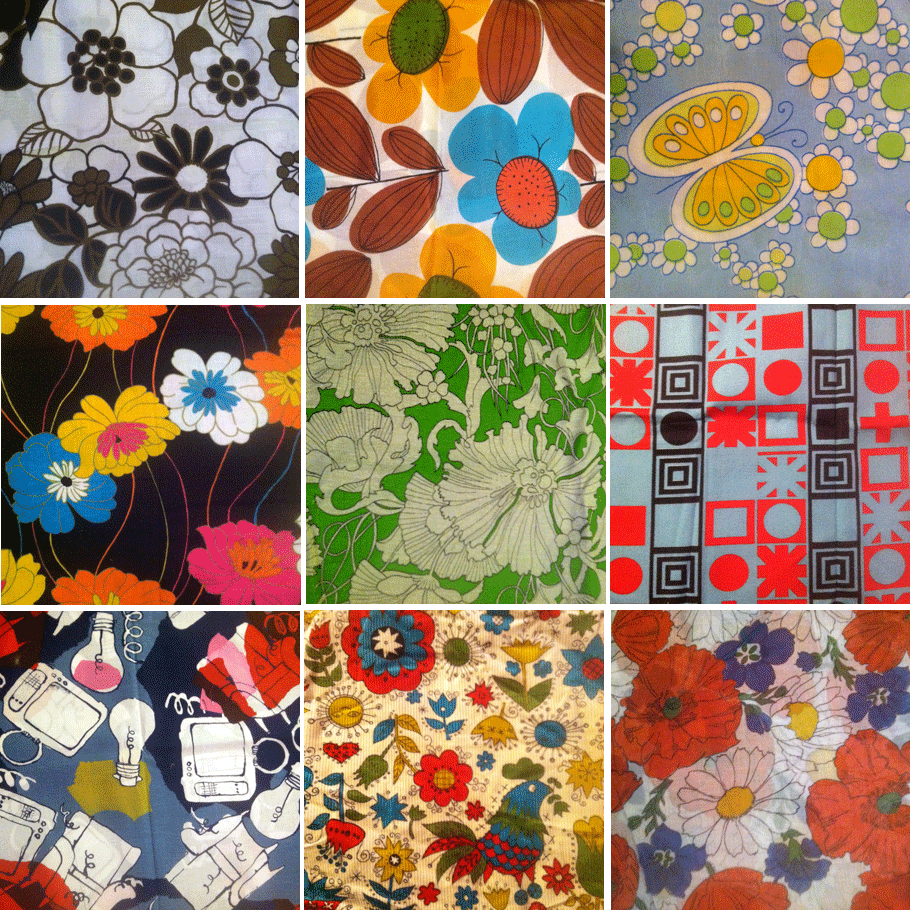 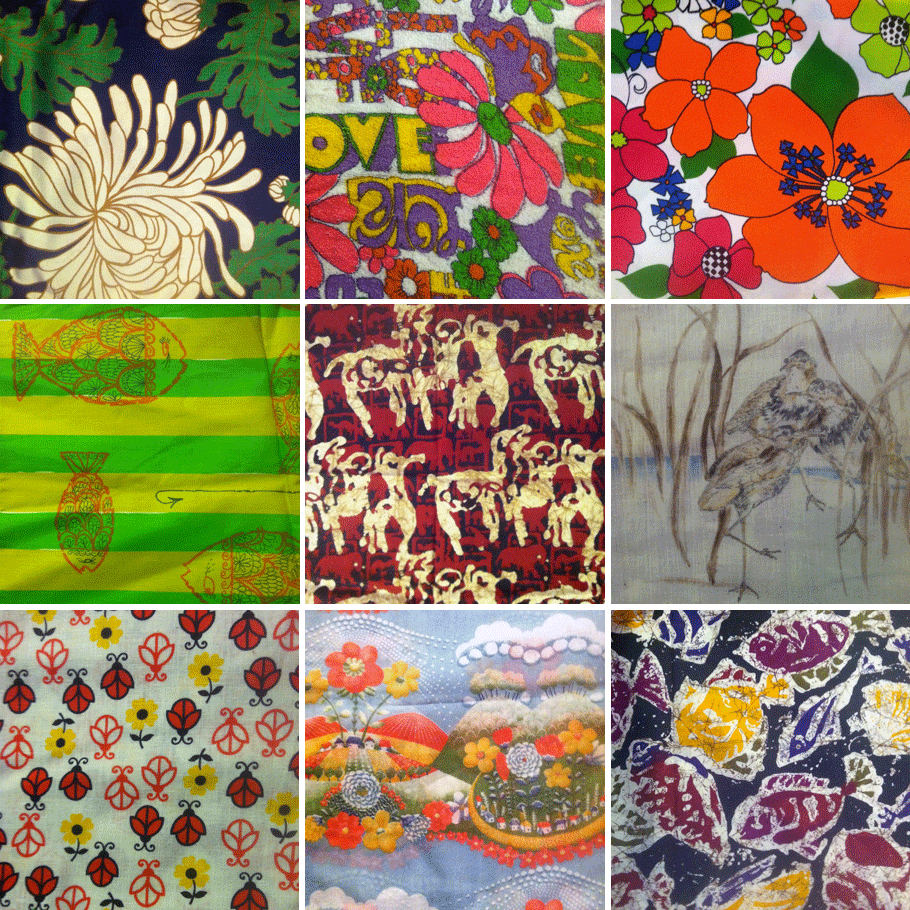 Of course grandma had a pattern stash to match the fabric. She clearly favored Vogue patterns, and she had specimens from the late 1950s all the way through the early 2000s, about half of them with designer names. This included a truly staggering number of caftans and jumpsuits, three envelopes of hats from when people actually wore hats, evening and outerwear options from every era, beachwear, and every imaginable flavor of skirt suit and shift dress, plus a handful of styles for kids and men. 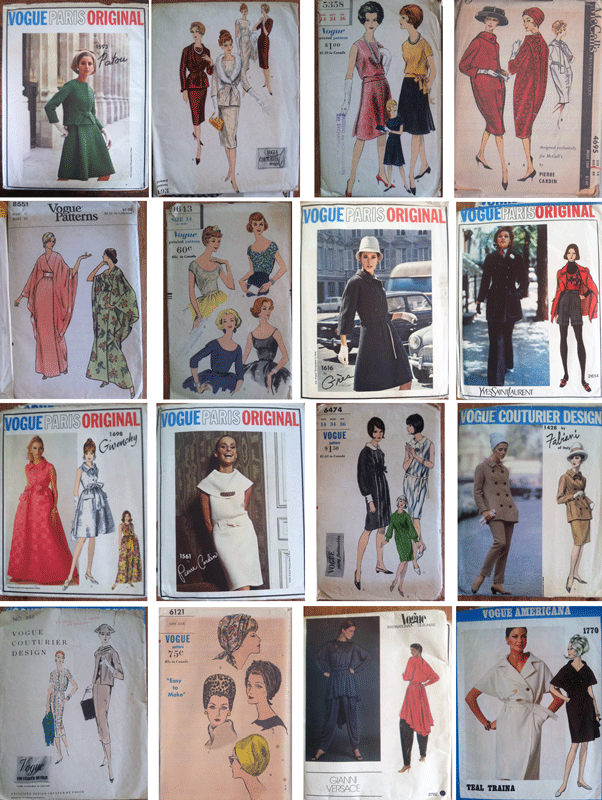 Not all the patterns are in great condition; not all are complete. This was very much a working collection. 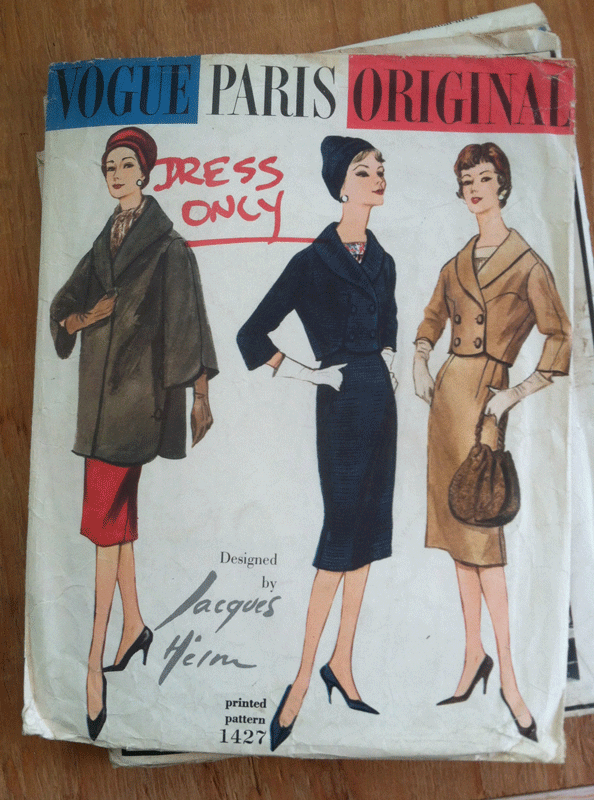 Only the dress?! I WEEP.

We’ve even found several garments that she actually finished, stored in her actual wardrobe. V1551 and V6771, for example, both from the mid-1960s by the pattern date: 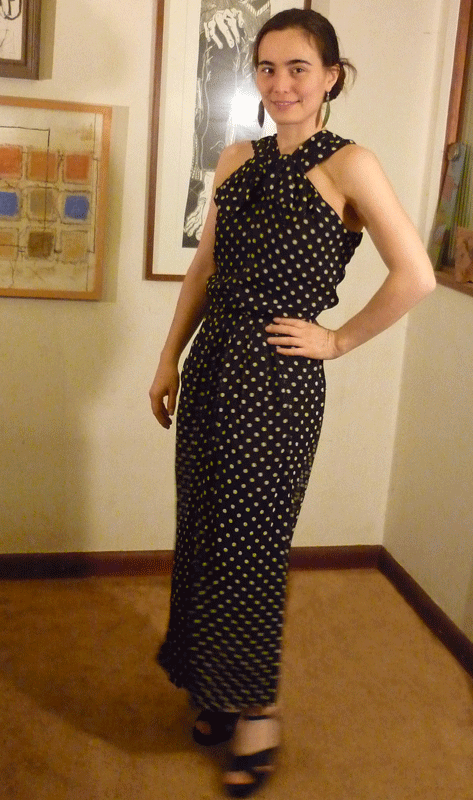 This one is still totally wearable, no? I did some minor repairs and added a hook and eye to the top of the zipper. 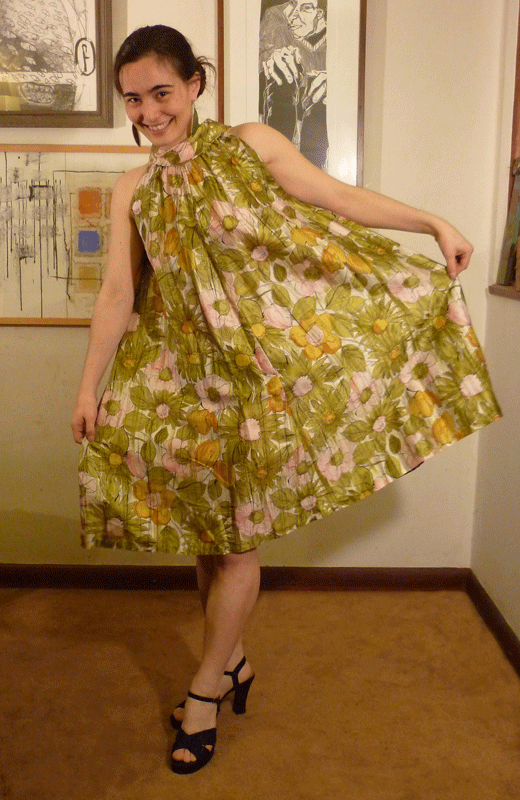 The fabric on this one is a lovely silk or pseudo-silk, but I dare say the print didn’t age so well. I also raided my high school shoe collection for this shoot, because all I’d brought with me was boots. Haw. Yes I know they don’t go.

Possibly the coolest thing was tucked away in various paper bags and envelopes amid the rest of the stash. Grandma had saved unfinished objects dating back decades, all neatly stored away to finish later. Although there are plenty of missing pieces and vanished instruction sheets elsewhere in the collection, these appear to be complete—meticulously folded and packed up with envelope and instructions, so that everything would be all ready to go whenever she found time to return to them. Some are uncut, some are cut and tailor tacked but not assembled, and others are in various stages of construction. 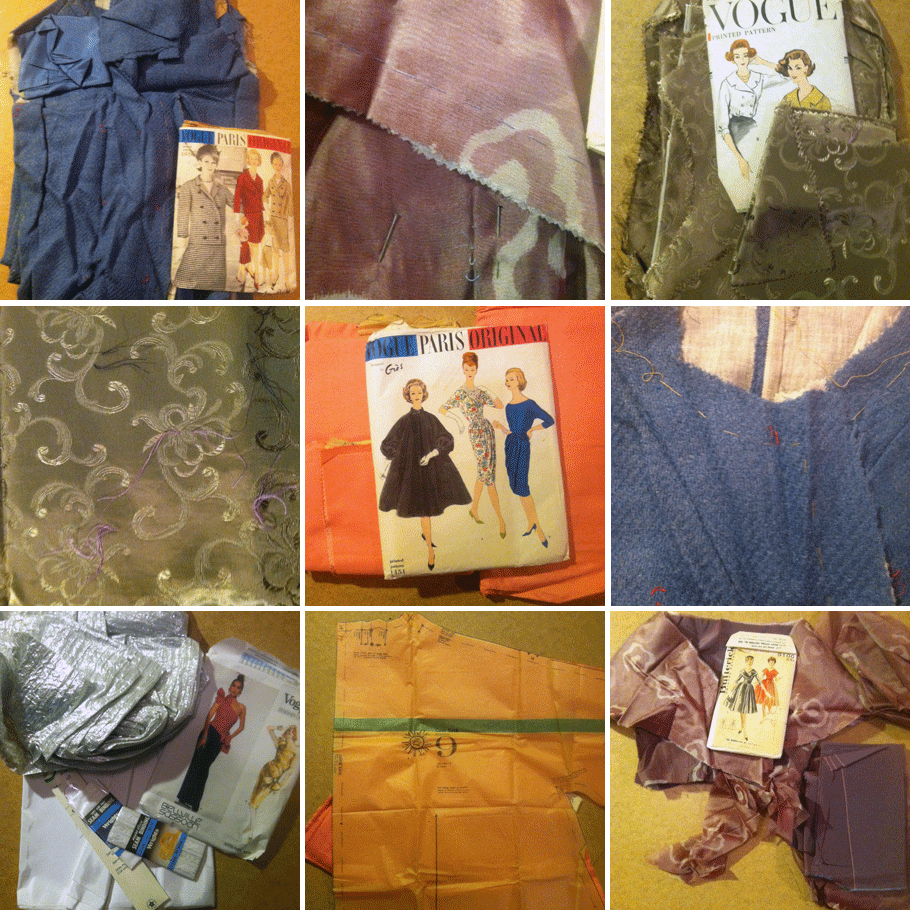 There’s something a little forlorn about these abandoned projects, decades out of style and yet never finished. But they’re also kind of exciting, like a long-buried treasure or a time capsule. Each one is a glimpse of Grandma’s creative mind at a single point in time, and in total they represent a pretty wide span of years. I’d love to pull them out and make them up someday, though I have no idea when I’ll be through with my current lineup of projects. They’ve waited this long; I don’t imagine another year or two will hurt them.

In the meantime, of course, I’ve got my own freezer bags full of UFOs; my own piles of untouched fabric and bins of patterns. Clearly I inherited grandma’s stashing habit, if not her taste for fish prints. From a certain point of view it’s a waste—of time, money, storage space—but I like it. I like having materials on hand for impromptu projects; I enjoy sifting through the waiting stacks and daydreaming about what they might become. No matter how long it takes me to get around to making them up, I’ve already gotten quite a bit of pleasure out of them. And now I’m enjoying Grandma’s stash as well, and I feel like I know her a bit better for the time I’ve spent among her treasures.

In that spirit, whenever I visit home I like to pick out a few bits and pieces to take back with me. This is what I ended up with this time: 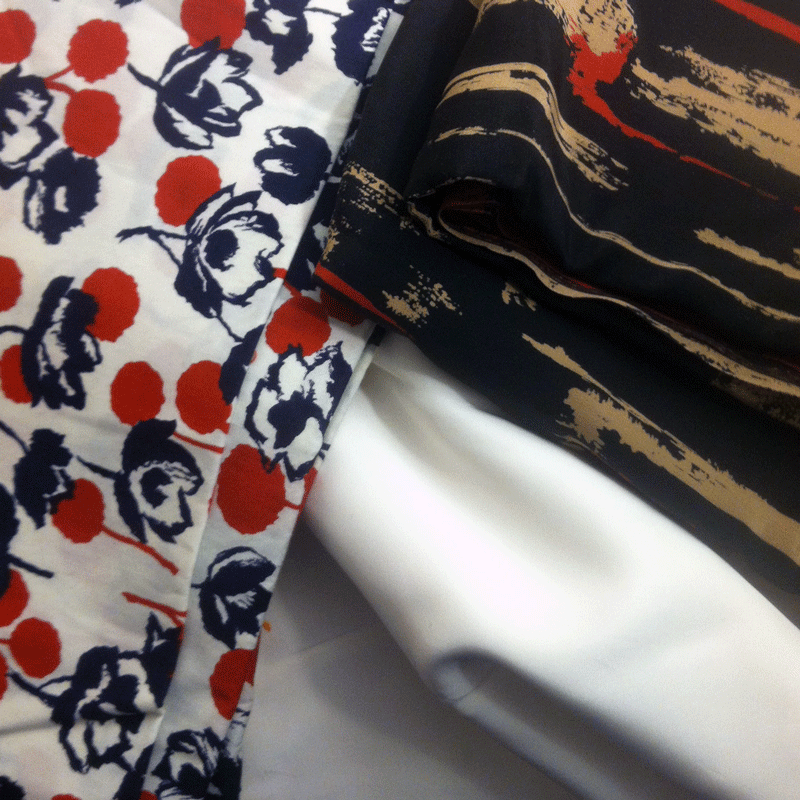 Awfully sedate, I know. But it’s a start.