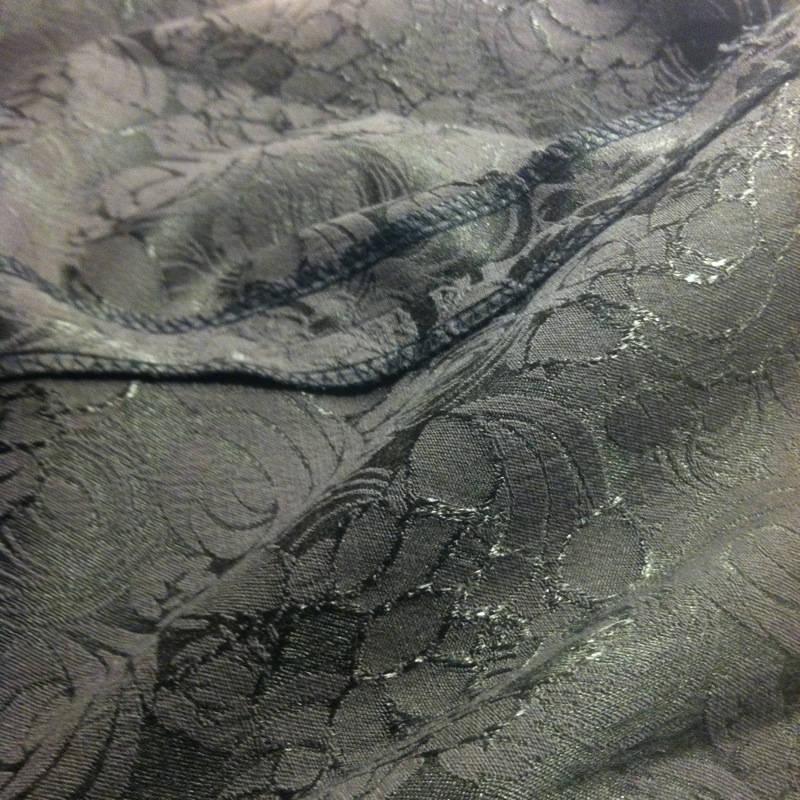 A brief-ish post because it’s been too long – here’s the result of some more easy pants sewing. The fabric is a mystery brocade from Winmil fabrics in Boston, so it’s been marinating in the stash at least three years. I assume it’s got some poly in it, and probably some cotton or rayon because it’s wonderfully well behaved and presses more easily than I would expect of poly. It also has enough stretch that I skipped the lining again, figuring it would recover a bit better than the green wool did. Time will tell if this is correct. 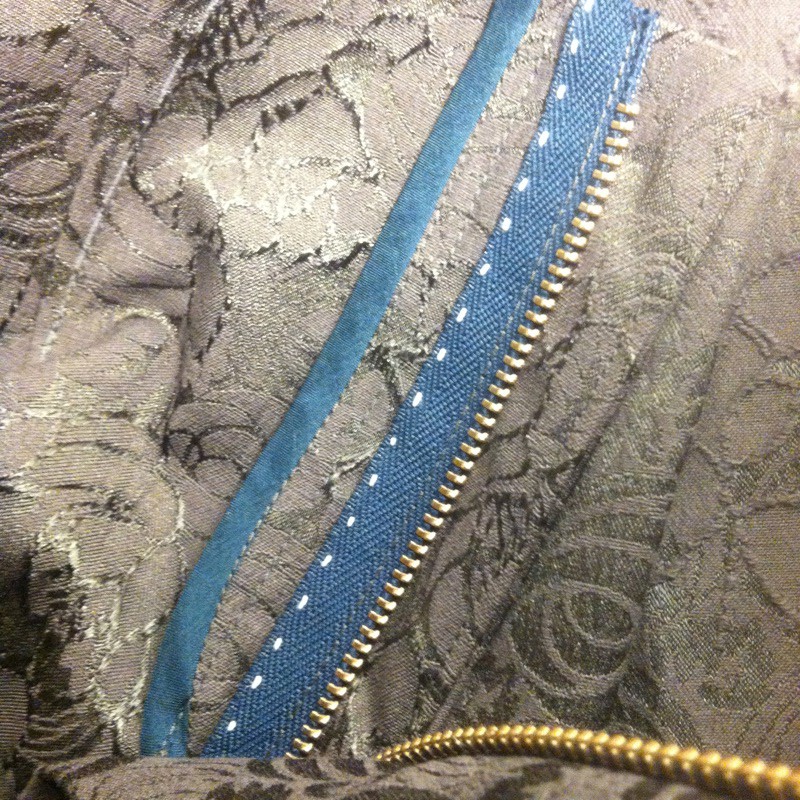 Construction-wise, these pants are pretty straightforward. The most time-consuming bit was the zipper, because my default is a full fly with a fly shield and everything. That visible basting on the zipper is becoming a sort of signature for me – I’ve done it on several pairs now, initially without realizing I was doing it. It’s not visible from the outside, but whenever I put the pants on I see that little reminder that they’re handmade. And yes, I’m still working through that same batch of silk bias tape. 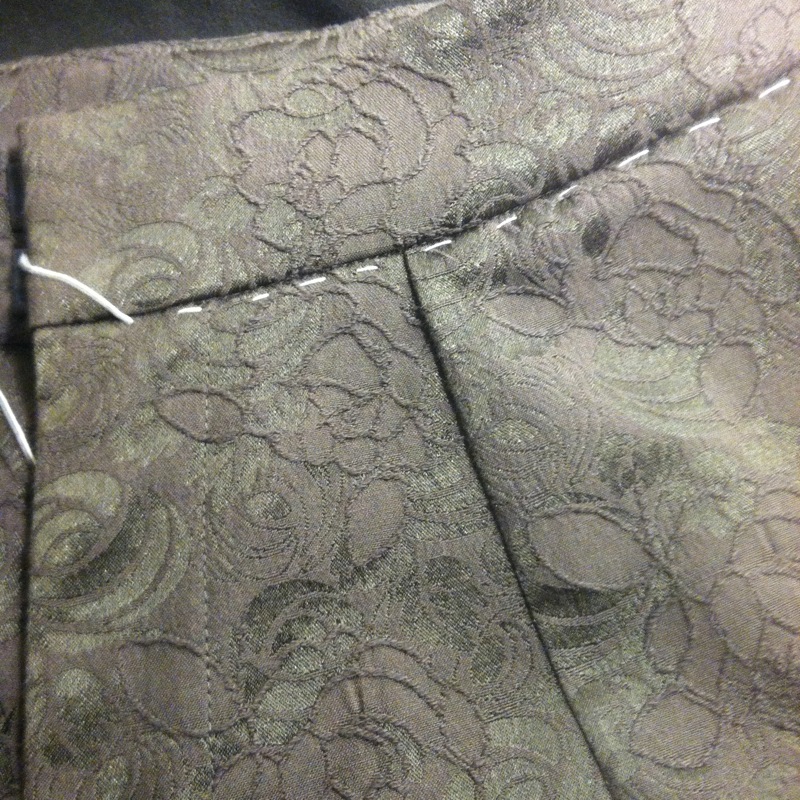 Every time I fail to baste a waistband before stitching it down I regret it. Pinning at the seams doesn’t seem to be enough – inevitably I get some creep toward the end of the seam and it doesn’t lay properly flat. It doesn’t actually take that long to baste; certainly less time than it takes to unpick the ditch stitching and redo it three times. Baste everything is the moral of this story. 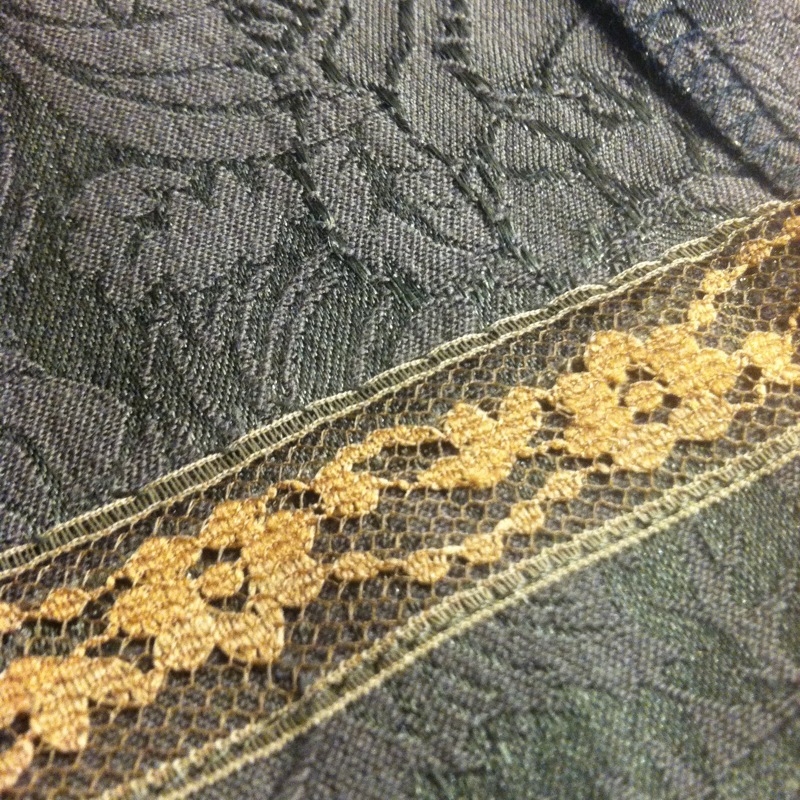 Nylon hem tape again. I love and hate this stuff; it’s probably the flattest possible clean hem finish but it’s scratchy and stiff and the colors are never quite right. I didn’t have forest green or chocolate brown in stash, so I went with this yellowy tan (browner than it looks here; actually somewhere between marigold and cat puke) for an interesting contrast. Might replace it at some point if I find something more appropriate.

And that’s pretty much it. Went with clamp-in trouser hooks this time, may need to add a buttonhole at the underlap corner to take some tension off. I sometimes get lazy about those, but they do make the waistband look nicer when worn. 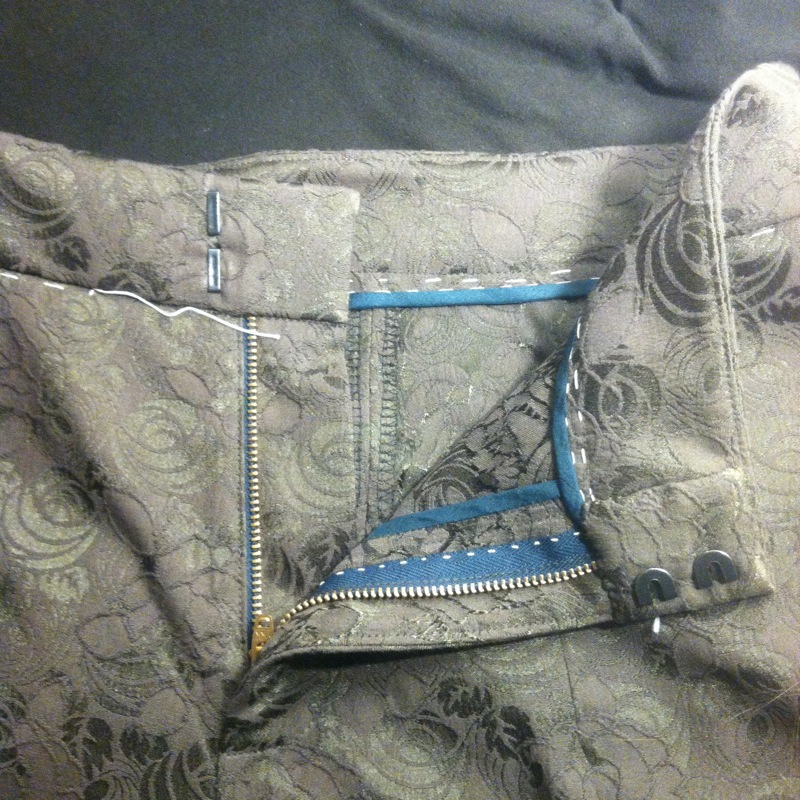 I know I should get a picture of these on, but I’ve delayed posting this long enough and they’re honestly very similar to the last pair unless you get close enough to see the texture. I seem to have been in a bit of a color rut with all this green. I’ve since broken that, sort of, but I’ll get to that another day.