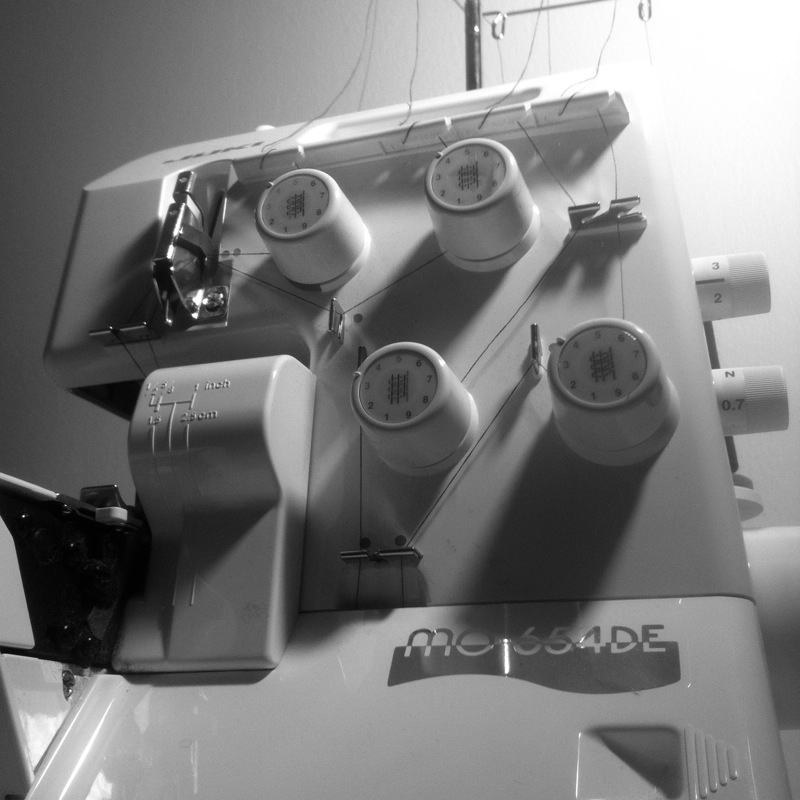 I see a lot of people trying to scare beginners off sergers. Suggestions that they’re too tricky to thread, the stitching is hard to unpick, the tension finicky, the blade choppy and intimidating, etc. Generally it’s meant kindly—to spare people frustration, and maybe let them off the hook if they don’t have budget or confidence to invest in a second machine and are afraid they need one for x or y reason. Okay, fine! You don’t need a serger to sew knits, or finish seams, or anything else really, and people do fabulous work on knits and otherwise without ever coming near one. But I really like them!

I spent almost ten years in gymnastics, so leotard sewing was a pretty big deal in my early days. A serger is nice for that kind of thing because the seams have more give than a standard straight stitch, so they’re less likely to pop when stretched. As a result, I was whirring away on the family serger by my early teens. By high school my grandma was calling me over to rethread and fix the tension so she didn’t have to dig out a magnifying glass. I don’t mean this as a boast—I was just fortunate enough to have learned the basic operation and troubleshooting bits before anyone told me it was supposed to be difficult. If my slapdash teenage self could handle it with a manual and a reference book or two, I am certain that serger operation is well within the capacities of the average adult with internet access.

The majority of my sewing projects in those days were knits—leotards, t-shirts, knit dresses. I still have a couple pairs of jersey lounge pants from that era, though most of my ventures into jeans and woven tops encountered insurmountable fitting issues and are long gone. I’m boggled by the people who think beginners should stick to wovens; to my mind a t-shirt in a hefty cotton-spandex knit is much easier and more practical than a woven dress. And with a serger, you can whip up a top that’s basically indistinguishable from RTW in the span of an afternoon. That’s pretty satisfying, especially for a beginner! Certainly it was a good fit for my impatient sewing habits of that time.

After college, when I moved into my first apartment and got my very own sewing machine, it was a couple years before I worked up to adding a serger. (a freelancer at the time, I was very good at talking myself out of large purchases.) I made a handful of knit tops on the regular sewing machine, using zigzag stitches and stretch stitches and all the other workarounds that are commonly recommended, and found it intensely frustrating. It was slow, especially when using the stretch stitch, and it always felt like a half-baked approximation compared to the neat, efficient finishes I’d enjoyed at home. I actually felt quite a bit less confident about my knit sewing than I’d felt as a teenager, even though my technical knowledge had improved, and I found myself buying mostly wovens as a result. 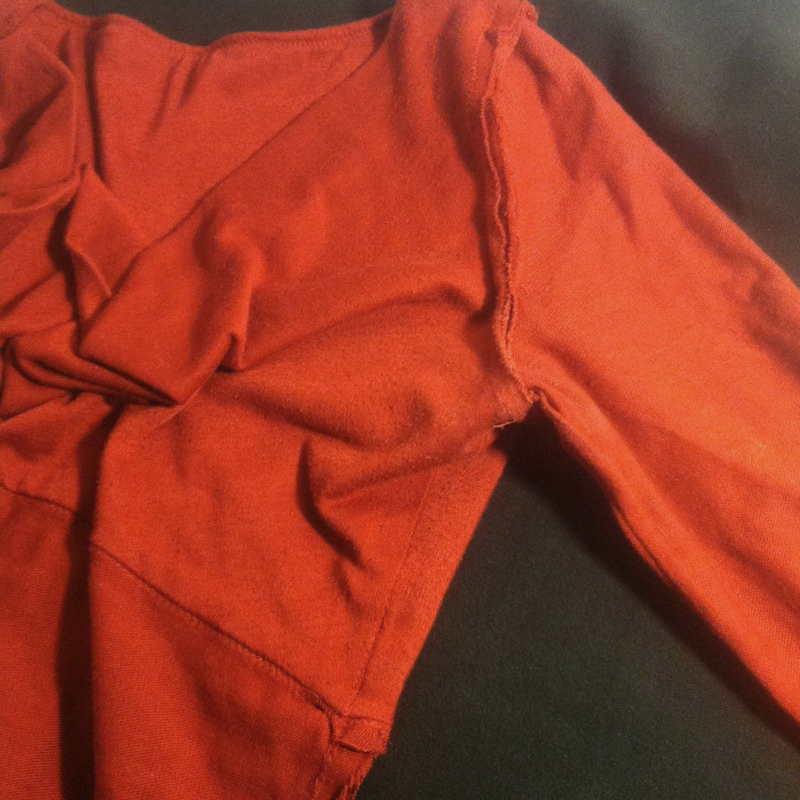 A top from the long grim sergerless era. I still wear it sometimes, but those seams annoy me every time I put it on.

And oh boy, now that I have a serger of my own I would fight off zombie hordes to protect it. It is a beautiful, solid, reassuring piece of mechanical perfection. Let’s start with the differential feed: that thing is golden! It’s a dial that allows you to adjust the speed of the front and back feed, so that the fabric is stretched or compressed slightly as you sew. This can produce gathers or lettuce edges in extremes, but is more frequently employed to ward off puckers in delicate fabrics or prevent wavy seams in bias or stretch fabrics. I have no idea why regular sewing machines don’t come with this feature when basically all sergers have it, but I would be quite willing to plunk down some dollars for it.

I mostly use my serger in the standard 4-thread overlock mode, as it’s such an excellent general-purpose stitch for seaming knits and finishing edges on mid- to heavyweight fabrics. But in theory it can do a whole slew of other stitches, rolled hems and flatlocks and so forth. It also has all kinds of wacky feet, including ones for gathering, elastic, couching, and all kinds of other things that could theoretically come up someday (though admittedly I do just fine attaching elastic with the standard foot). It blazes through edge finishes, which makes long seams on skirts and pants much more bearable. I’ve even been known to use it for blind hemming on a t-shirt, when I was doing a rush alteration for a dude friend and didn’t want to bother switching out the sewing machine thread.

The biggest complaint about sergers as opposed to sewing machines is the complicated threading, but I SWEAR IT IS NOT THAT BAD. Even the one I learned on, which had an irritating lower looper assembly that you needed a special extra-long needle threader to get through, was not that bad. Two rules: thread the machine in order (usually right to left), and follow the color-coded dots. Most machines have a perfectly good threading diagram in the manual, or often printed right on the access door. If you’re actually allergic to poking threads through a series of loops, there are a number of brands now that are happy to perform a walletectomy in exchange for fancy pneumatic self-threading technology.

As for the tension issue, well, it’s just a matter of learning which control is associated with each thread. A good reference book will have you sorted in minutes, or just thread up your machine with a different color on each spool so you can see at a glance which goes where. Grab a good-sized scrap to test on, then adjust and sew and adjust and sew until you’ve got a nice balanced stitch that doesn’t crunch the fabric or hang off the edge. If you write down the settings you used, you can go right back to them the next time you use that stitch and fabric weight. Easy! And again, there are fancy-pants machines that will take care of all this business for you if you can’t be bothered. 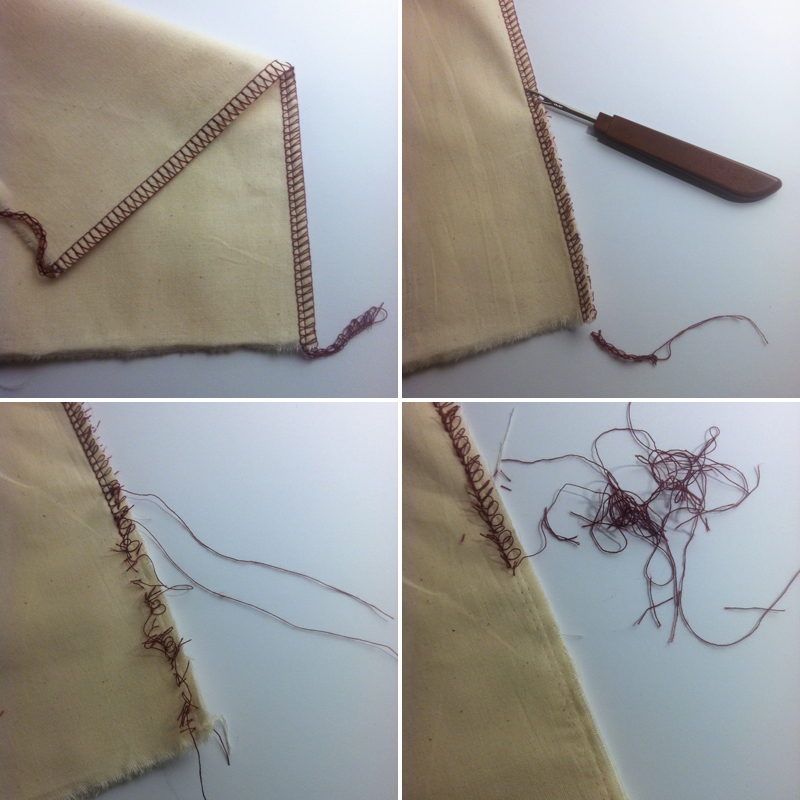 Unpicking serger seams is another area where people get hung up sometimes. It’s a lot of thread, and if you try to go about it stitch by stitch it is indeed a pain in the ass. But here’s the thing: all you have to do is cut the looper threads and the whole thing unravels. You can zip a seam ripper along the loops or even trim the edge off with your shears. Cut the chain off right at the end of the seam, then tug on the needle threads and they should pull right out, leaving a trail of looper “eyelashes” that you can pluck away with your fingers. Messy, but not difficult.

I can think of a few situations where you might not want to shell out for a serger. If you’re really really a beginner and still not sure sewing is your thing, it makes sense to keep your buy-in to one machine until you’re more certain. If you genuinely don’t give a shit what the insides of your garments look like, then don’t let me tell you otherwise. If you are seriously on a budget, there are plenty of decent alternatives to buying another machine, and you shouldn’t worry that it will compromise the quality of your work. And if you’re a hardcore couture nut who aims well above ready-to-wear quality, you may not be interested in the more utilitarian finish a serger produces.

But seriously, everyone else should consider getting one. I’m more than willing to invest the time in handwork when it counts, but for mundane seam finishes a serger is an invaluable time saver. It makes knit sewing a breeze, which should endear it to costume folks in particular. And given that you can have a basic model for about $200, it’s a more than reasonable investment for most serious hobbyists. You’ve probably spent more than that on fabric. So don’t let anyone talk you out of it.

3 thoughts on “I have some opinions about sergers”

This error message is only visible to WordPress admins
There has been a problem with your Instagram Feed.