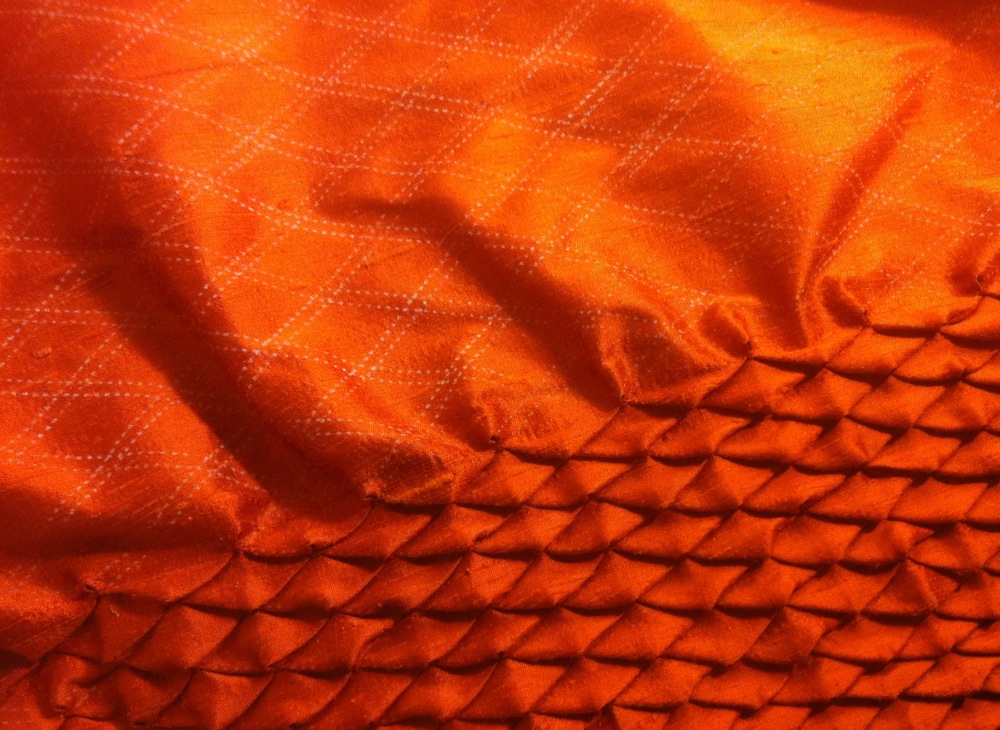 The project associated with those piles of silk is eating up most of my time, but I thought I’d take a minute to share a decorative technique I’ve been experimenting with for a bodice detail. I wanted some kind of fabric manipulation to contrast with the other embellishments I have planned for this piece, ideally with a feathery or scaly feel. I experimented with arrow smocking, which was one of the techniques Michele Carragher used to create the gorgeous dragonscale effect in her embroidery for Game of Thrones. It wasn’t quite what I was going for, though, so I kept looking.

The technique I ended up settling on was inspired by a project in Shadowfolds, by Jeffrey Rutzky and Chris K. Palmer, but I arrived at it by a different method. The Shadowfolds method uses a smocking stitch that goes through to the top of each “scale,” whereas I wanted the scales in my project to be a little more dimensional with no visible stitching on the surface. 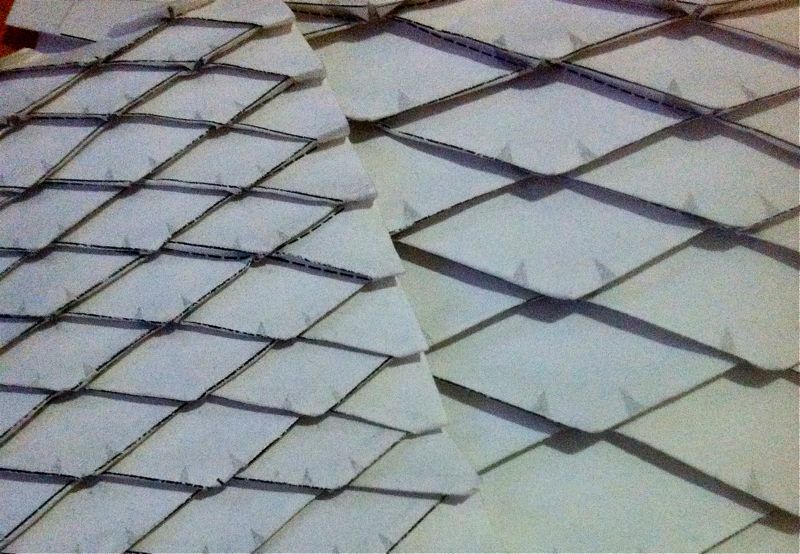 I used my best guess to recreate the folding diagram as if it was an origami design, since the smocking technique doesn’t work on paper. This took a little bit of expermentation, but eventually I got something workable and mocked it up at two different scales. (Though I dearly hoped I could get away with the larger size, the piece I intended to use it for is way too narrow for that. So instead I’m doing the small version, which is roughly four times the work. Never fails.) 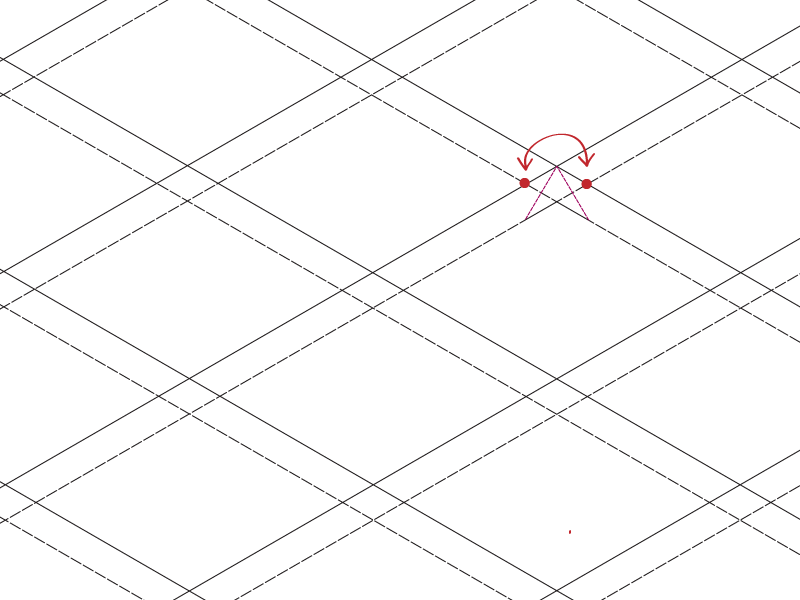 In the paper version, the long diagonal creases are folded first – the solid lines above are “mountain” folds in origami parlance, the dotted lines “valleys” – and then they’re collapsed in on themselves to form the scales. For each scale, the two points marked in red in the image above are brought together, and diagonal folds form along the dotted purple lines. I found it easiest to start at the corners and work toward the center, pinching the point of each scale to flatten it. It’s a little tricky at the smaller size, but you just kind of have to fuss with it until it works.

Once I had a workable paper model, it was time to translate it back into fabric. 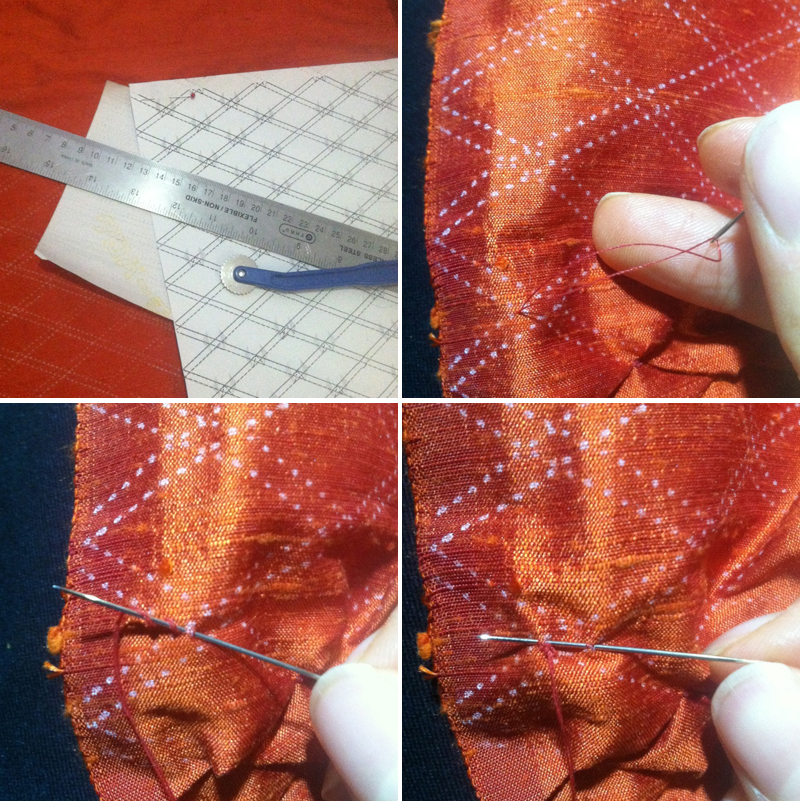 This is basically a smocking technique, worked on the right side of the fabric. I printed out a copy of my folding diagram, and used tracing paper and a tracing wheel to transfer it to the silk. You could also create the pattern directly on the fabric using a ruler and protractor, though. Knot the thread underneath, then bring it up through one of the two points marked above. I like to knot it again on the top of the fabric to make sure it’ll hold. Then bring the needle over to the other dot and pick up a small stitch through the point where the lines intersect, working back toward the first dot. Pick up another stitch across the first dot, and pull the thread through. 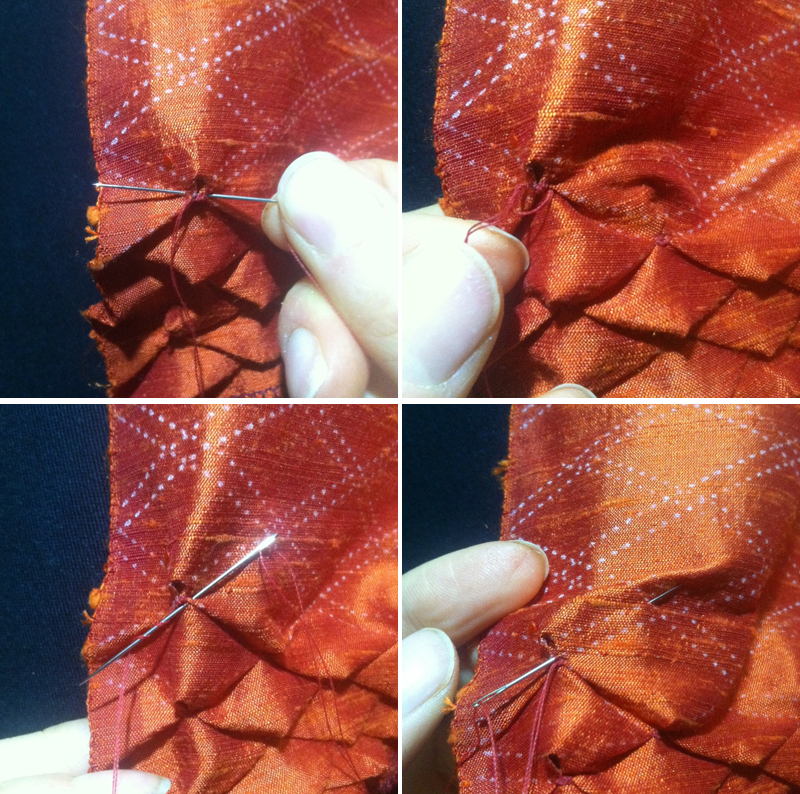 Take a second stitch through the same layers to help pull them together, and wrap the thread around the needle to form a knot. Pull the knot tight. Make sure the creases have formed correctly for the pleats on each side of the stitch, then take a stitch through the pleat and the layer below to hold them in place. I like to knot the thread once more at this point, to make extra sure the scale is secure. Stick the needle through to the underside of the fabric and come up at the first dot for the next scale. This is a “slack” stitch that doesn’t get pulled tight, so do another knot stitch before starting the next scale to prevent it from puckering.

I like to work the scales across the fabric from left to right, bottom to top. I measured my paper samples to determine how big I needed to cut my fabric panel, and once I’ve smocked the full panel I’ll cut out my pattern pieces from that. I’ve got some long nights of stitching ahead of me before I get to that point, though. Yikes. 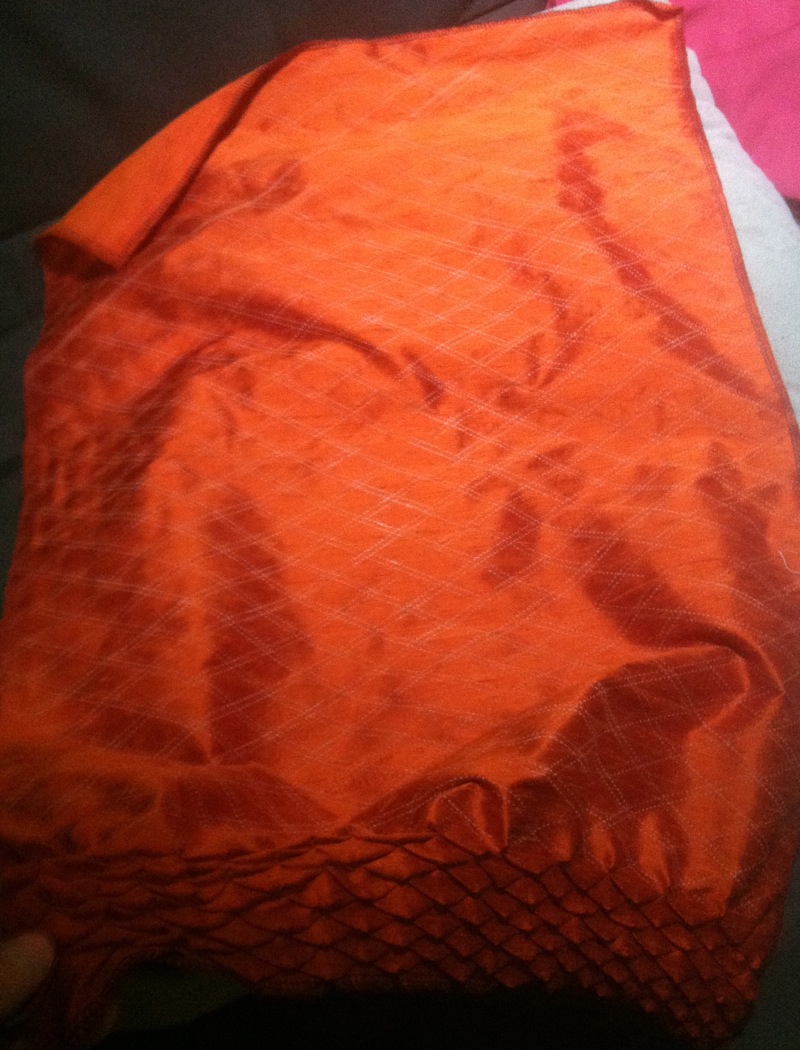