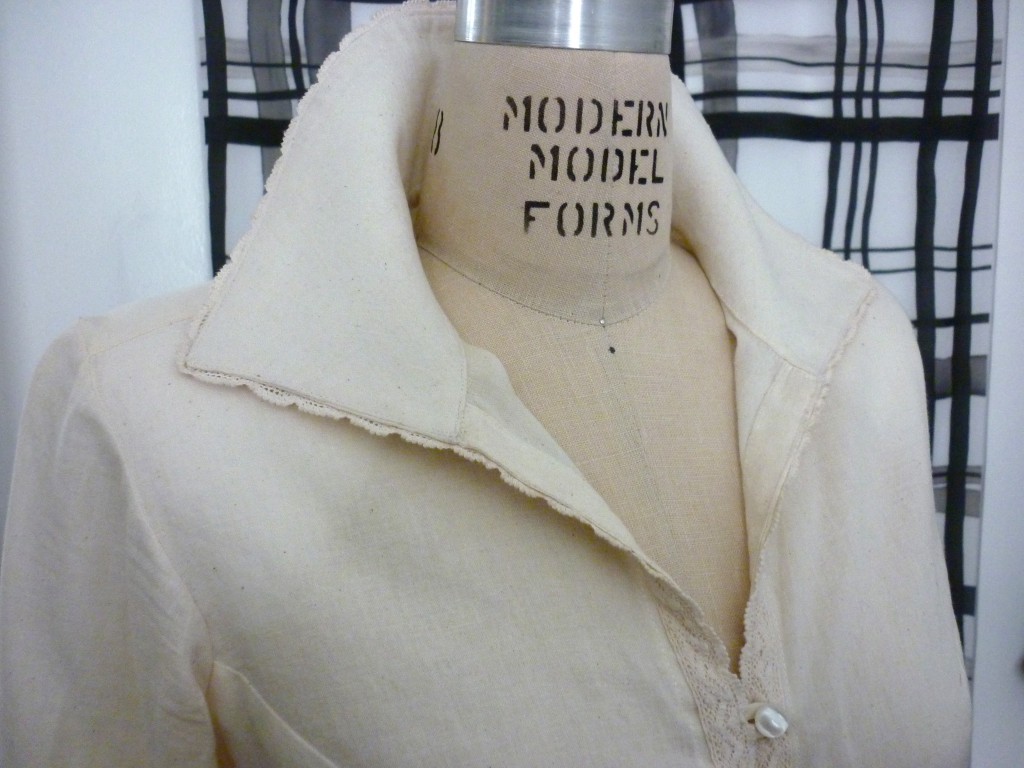 I spent a lot of time looking for a nice lightweight linen to make Ezio’s shirt.

I wanted a creamy, off-white color, and since there are a lot of layers in this costume I wanted it to be very lightweight to avoid adding too much bulk or warmth. But after a couple frustrating evenings tromping around the garment district, I ended up with nothing that seemed worth the $12/yd everything seemed to cost.

I went home and worked on developing the pattern instead, and at some point I looked over at my scrap basket and saw the $2/yd muslin I’d been using to mock up something else. Undyed, slightly coarse weave, and semi-sheer—exactly what I was looking for. While I’d resolved early on in this project that I would shell out for the nice stuff if it meant better results, in this case the choice was pretty obvious.

I spent another evening hunting for a nice lace to match my fabric, and ended up with a white cotton lace from Pacific Trimming, which I soaked in coffee for an hour or so to tone down the brightness. I wasn’t particularly conscientious about the process, but I think the color came out a pretty good match! 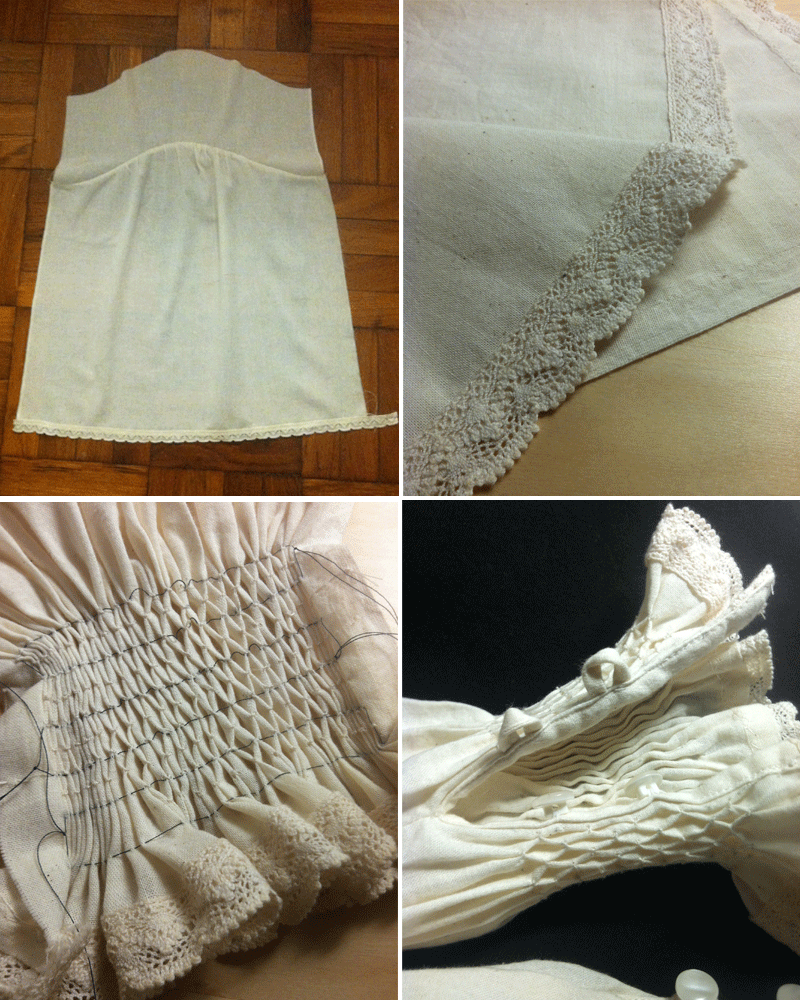 Most of the shirt is covered by the other layers of the costume, so there was a lot of guessing and a little bit of “whatever, I’ll just do what I want” in this piece. Ezio’s shirt in the game art seems to have a dropped shoulder, or at least there’s a seam across the bicep with gathering below. Since the shoulder isn’t actually visible, though, I did a standard set-in sleeve for more mobility and less bulk. Then I created an additional curved seam around bicep level, and slashed and spread the lower portion to create the gathers. I cut and assembled the sleeve pieces using a narrow French seam, and hand-sewed the lace along the lower edge.

In some of the reference images I found, there’s a tiny bit of sleeve visible below Ezio’s vambrace on one side. It occurred to me that the texture looked a bit like smocking, so of course I had to give it a try. I pleated the cuffs at half-inch intervals, and spent about two evenings smocking them in a honeycomb pattern. Then I used a French seam to sew up most of the sleeve, faced the cuff opening with a narrow strip of self fabric, and added bias loops and buttons to close. 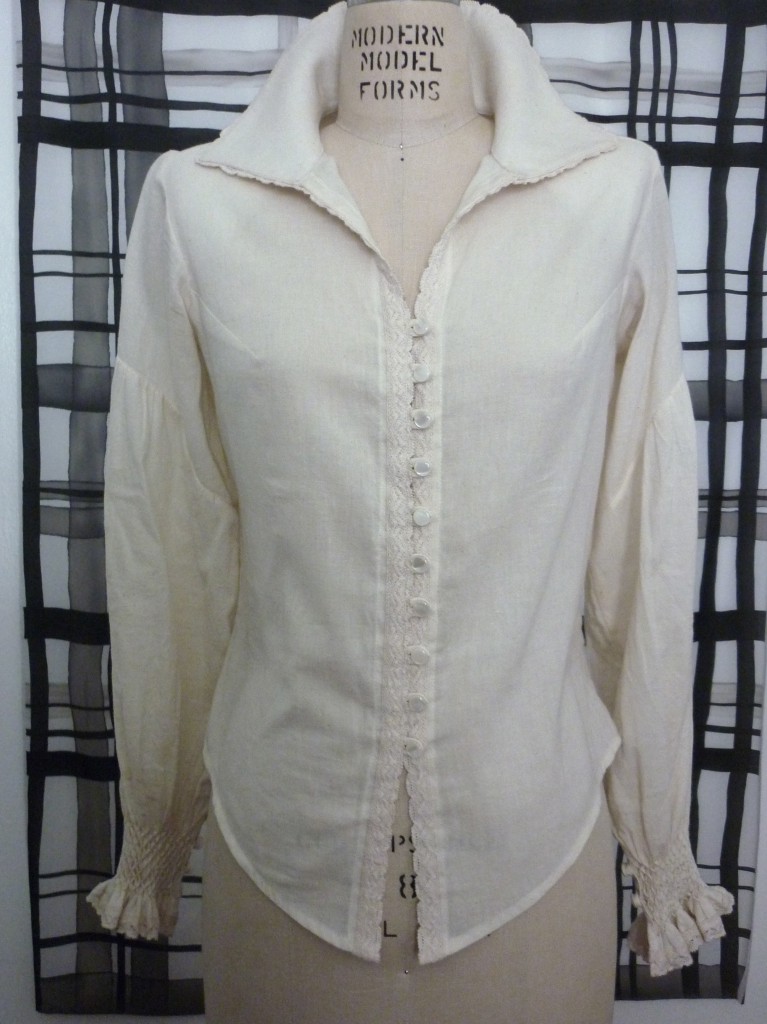 The rest of the shirt was pretty straightforward. I developed the pattern from a bodice block I drafted up ages ago, and went with an armhole dart to give it a nice fit around the bust. The interfacing I used is a bit on the soft side for a collar that’s supposed to stand up like that, but it does have a nice roll and a heavier interfacing might have been too much for this fabric. The center front also uses a button-and-loop closure, and I trimmed it with more of the cotton lace, again attached by hand.

That’s about it for this piece. It’s probably the simplest part of the costume, and it took about a week from beginning to end. I’m pretty pleased with how it came out, and I might revisit the pattern later—with less dramatic sleeves and collar it would actually make a nice everyday blouse. I’ve already worn this one with another costume in addition to the Ezio one, but I’ll get to that a bit later. Onward!


Spent my snow day finally making some progress on