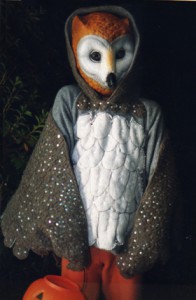 I don’t think I intended this to be a scary costume, but that mask is pretty terrifying.

Every hero needs one, right? Even if I’m only the champion of spending all my weekends buried in fabric and thread clippings.

Here’s where it begins: I grew up in a craft-obsessed city, among a family of relentless creatives. My folks are writers, designers, illustrators, crafters, and makers of all stripes. On any given day, most of the horizontal surfaces in the house would be strewn with creative paraphernalia: beads and jewelry findings, colored pencils, stacks of origami paper. My parents both sewed, too—maybe not every day, but given the right excuse they produced marvels.

It feels appropriate to be writing this the week of Halloween, because growing up it was probably the most-anticipated holiday of the year. My sister and I always scorned run-of-the-mill witches and ghosts; instead we demanded wildlife, characters from books, and creatures of our own imagining, and our parents obliged. There was the year I thumped around with a flashlight in my purple taffeta firefly tail. There was my owl costume with embroidered feathers down the front and fleecy wings encrusted with hand-sewn sequins. There was my sister’s utterly spectacular “weather girl” cape, painstakingly appliquéd with clouds and lightning, and my satin sorceress cloak with a floating cloud of glitter tulle. 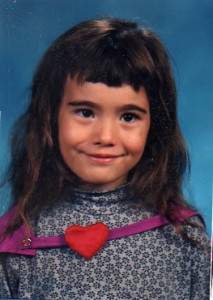 Oh yeah. Me and being an INCREDIBLE DORK go way back.

Not that we always needed a holiday in order to dress up, as evidenced by my second grade school picture. My dad made me that purple superhero cape, and damned if I wasn’t going to wear it proudly. (Three cheers for tolerant teachers, no?)

Inevitably, my sister and I started making our own costumes. We’d start contemplating ideas as early as July, and execute them through a combination of thrift store scrounging and handmade ingenuity. I don’t know that I ever topped her handmade sumo wrestler suit, but one floor-length cloak in crushed black velvet, lined in coral jacquard, made for a particularly memorable ordeal of cutting and hemming. In eighth grade I wanted to be a mermaid, so I made a halter-neck fishtail gown in the scratchiest glitter dot fabric imaginable.

Eventually, of course, we outgrew the candy-fueled tours of the neighborhood, and my costuming efforts became more sporadic. I continued to spend time sewing clothes and experimenting with patterns, and even made my own prom dress, but during college fashion sewing fell by the wayside a bit too (due in part to my lack of a sewing machine.)

The summer I graduated I threw myself into learning patternmaking, got my own sewing machine, and started making pants, shirts, and jackets on a regular basis. It felt good to be making things again, and eventually it led me to my current career. But costumes were the beginning, so when I finally fell into cosplay, it was a bit like coming home.