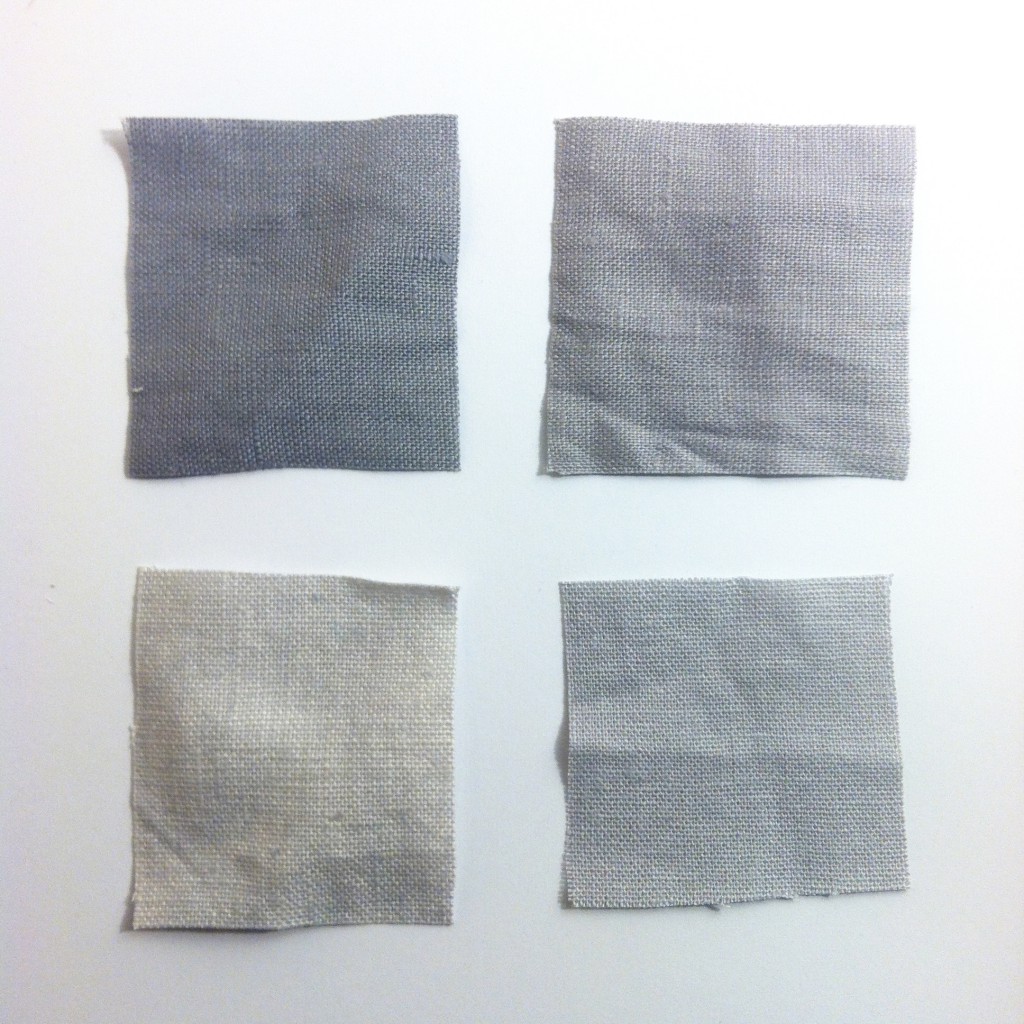 How hard is it to find bottomweight linen in a light, misty gray color?

The answer, it seems, is very. I made at least two trips to my beloved Gray Line Linen, poked around Paron and Mood, and the closest I found was the linen in the top left swatch. This is a respectable medium gray, and I’d have liked it a whole lot if I was just looking for linen to make a shirt or dress or something. But for Ezio it seemed wrong, and got more wrong the more I stared at it.

The second swatch (top right) is what happened when I hit the medium gray linen with a dye remover. I don’t think I got the water quite hot enough, or the dye remover concentration high enough, or somthing, so the effect isn’t very pronounced, but you can see it was starting to work. You may also notice that the color was getting warmer – almost purple. I could only assume that was going to get worse, so I finally concluded that this particular fabric just wasn’t going to do it for me. (Don’t ask me how much of it I bought before arriving at this conclusion, I beg of you. I’ll use it for something, I swear.)

The next option was to start over with some white linen and dye my own, so I trekked back to Gray Line and picked up four yards of a mid-weight linen with a nice texture. I ordered the Dharma Trading fiber-reactive dye in mist gray and made up a bucket of dye in my bathtub with the hottest water my taps could produce. (My building seems to have hell’s own hot water heater, so this is pretty respectable.) 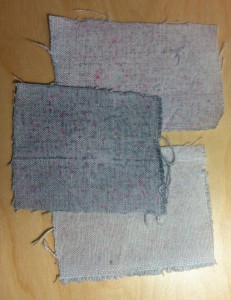 My first couple swatches looked like this, which as you might imagine was all kinds of nope. As near as I can tell, the pink dots are because the gray dye has a red component that dissolves more slowly than the rest of it, so the swatches that went in first were getting hit with some undissolved dye particles. The dark gray splotches confused me a little longer, until I realized that the salt hadn’t fully dissolved yet either, and that was causing the dye to darken. After a few minutes of determined stirring and no small amount of trepidation, I immersed my fabric and got on with it.

After an evening of hot, sweaty work (rinsing dye out of four yards of linen turns out to be a lot more work than the dyeing itself) the results were very much improved.  I did the linen in two batches, following the suggested procedure each time, and produced the color shown in the lower left swatch in the top image, which was pretty acceptable as far as I was concerned. This is the fabric that appears in the finished costume images, so you can judge for yourself how I did. If I was doing it again I might have done a bit more fabric for a safety margin, as I ended up having to recut a couple pieces and it came down to the wire a bit in the end.

But what of the fourth swatch? I’d nailed my main fabric color, but I knew I’d need binding for some of the edges and I was concerned that the main fabric would be too heavy. I picked up a yard of a lightweight cotton-linen blend and dyed it according to the same procedure, but either I left it in too long or the blend slurped up the dye a little more enthusiastically than the plain linen had and it turned out too dark. I tried using it anyway, but the color difference was pretty obvious and I ripped it right back off. I might as well have used the crappy bias tape out of a package; it was that bad.

In the end I used my main fabric for the binding after all, and because I was really short on fabric by this point I had to cut the strips on the straight grain. Fortunately linen is a glorious, malleable treasure of a fabric and it came out beautifully, with just a little bit of hand-sewn finessing to prevent bulk at the ends of each binding strip. But I’ll get to that later.